Home » Blog » How to Grill a Whole Live Lobster

How to Grill a Whole Live Lobster 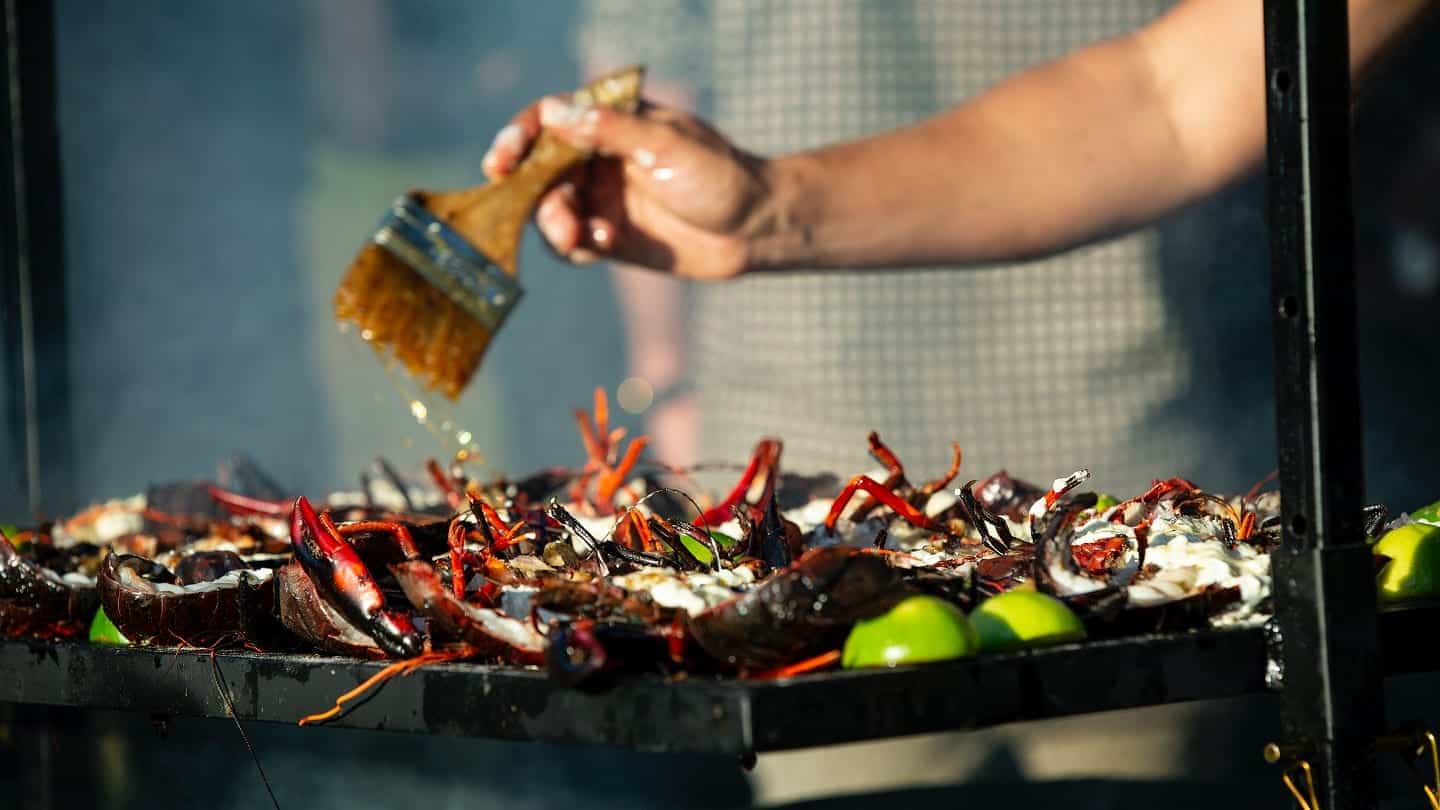 It’s summer, which if anything, means it’s grilling season in Maine. If you are the master of your backyard grill then learning how to grill lobster can be a big plus for you and all your lobster loving friends and family. Though there are several ways to prepare lobster—boiling and steaming come to mind first—grilling lobster is an option that should not be overlooked. It gives the rich, sweet meat a smoky, BBQ flavor that only an open flame can deliver.

More people eat lobster during the summer months because there are so many lobsters readily available. From July through the early fall is peak season for trapping and hauling. Lobsters migrate to the warmer waters closer to shore during the summer months, and the majority of them shed their old shells to grow into their new ones.

Should I Grill Soft Shell or Hard Shell Lobsters?

For lobster aficionados, that means there are more soft-shell lobsters on the market than hard-shell lobsters. With soft-shell lobsters in abundance, they are less expensive. Some chefs would argue that they are easier to prepare and grill, too. The soft shell allows the heat of the grill to cook the lobster more quickly and evenly.

How to Prepare Lobster for the Grill

All of that said, whether soft-shell or hard-shell, the methods for grilling are essentially the same. However, as with any preparation for lobster, it’s imperative that they are properly stored alive before cooking. A lobster’s meat is not edible if it is not alive at the time of cooking it. They need to be refrigerated in the packaging they were transported in until cooked. Never store lobster in cold water or place ice on them, either—freshwater kills lobsters. When it’s time for grilling, a fresh, live lobster can be swiftly and humanely killed. Dull its senses by placing it in the freezer for 10-15 minutes before cooking. Then place it belly up on a cutting board and, using a large, sharp kitchen knife, drive the blade between the antennae to split its skull in half.

It should be noted here that lobsters can be grilled completely whole or halved. Many recipes call for the latter to ensure more of the smoky, grilled flavor. If you choose to grill whole, after the lobster is dispatched, place it on the grill rack over medium-high heat (400F to 450F). Close the top and grill for about 5-6 minutes per side. When they are done cooking the shell will turn bright red with a few darkened spots. To be certain, check the meat color by breaking one lobster open at the tail and body. The coloring of the meat should be opaque and white.

To halve a lobster for grilling, simply continue splitting it from the head downward to the tail when dispatching it with a large kitchen knife. Once cut, the small grey sac behind the head should be removed, as should the black roe if it is a female, the green-colored liver, i.e., the tomalley, and the intestinal black vein that runs from the stomach sac to the tip of the tail.

Once it’s ready for the grill, add any type of seasoning—baste with olive oil or melted butter, salt, pepper, minced garlic—whatever is preferred. Place it on the preheated grill, medium-high heat, with the split side up. Close the top and let it grill for about 4-6 minutes. Open and baste again with the oil or butter, then cook for another 4-5 minutes. To preserve the juices, it’s suggested not to flip the lobster. The oil or butter will keep it moist.

Finally, the shell of a lobster’s claws is a little thicker and can take more time to cook. You can either remove by twisting them from the carapace to be grilled separately a couple minutes longer or, if kept intact, simply cover the claws with a roasting pan or pie tin for the lobster to cook evenly.

It’s Going to be Quick!

Remember—once the lobsters are on the grill it’s important to monitor them. They will cook fairly quickly. Overcooked lobster can dry out and turn rubbery and tough. Once the meat begins to turn opaque and firm up, pull the lobster from the grill; it will continue to cook for a few more minutes once removed from the flame.

Get Ready to Impress

Grilled lobsters are delicious and easy to cook. There’s actually more time in preparation than the grilling. Once you get into the rhythm, you will be able to impress your family and friends all summer long!