Home » Blog » Bluefin Tuna from the Gulf of Maine: A Pocket Guide

Bluefin Tuna from the Gulf of Maine: A Pocket Guide 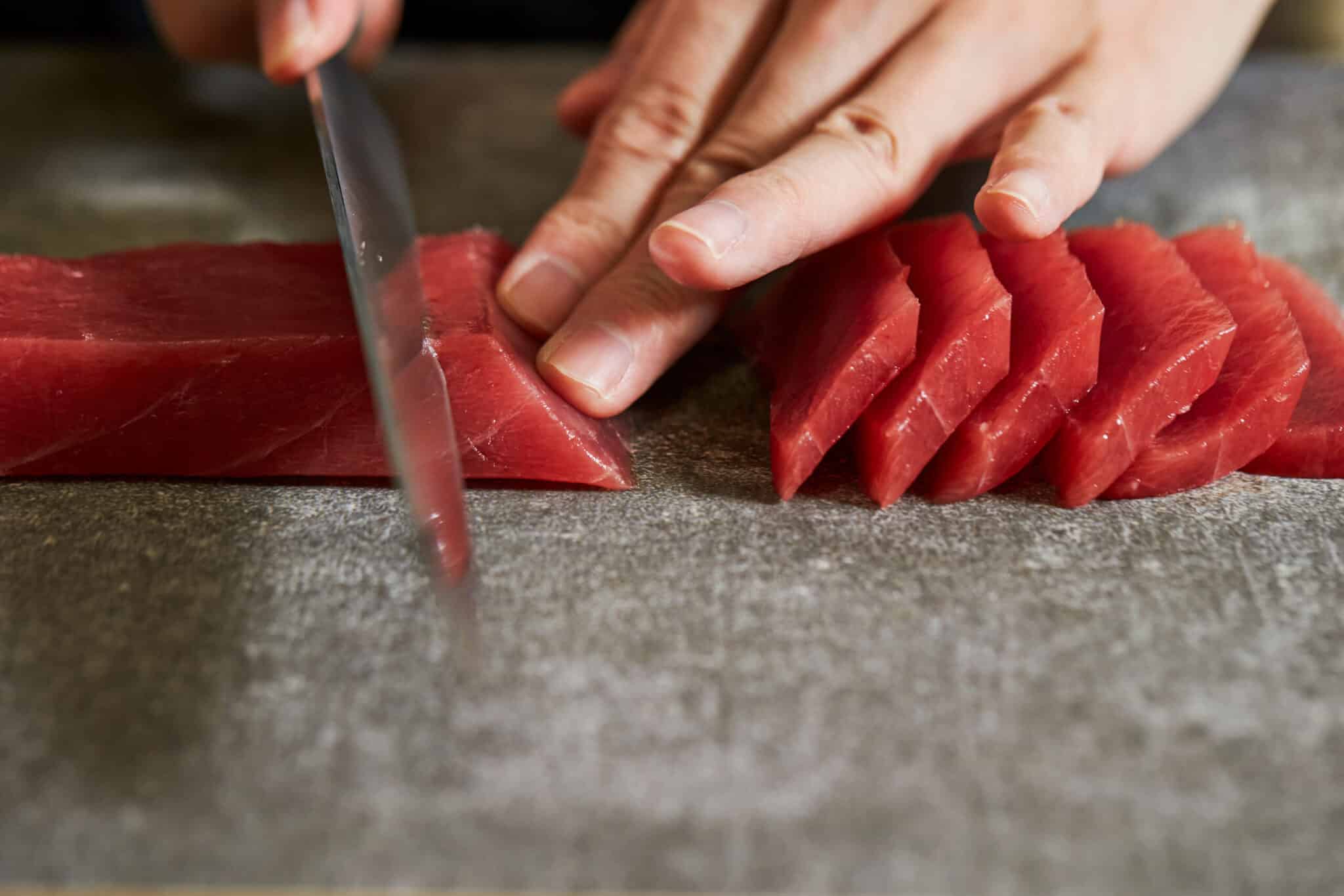 Atlantic bluefin tuna is one of the Gulf of Maine’s largest and most highly prized fish. Known for their lightning-fast speed, these tuna are surface-dwelling, voracious predators that commonly reach lengths of over 6 feet but can grow up to nearly 15 feet in length and top 1,500 pounds. As a top predator in the marine food chain, bluefin tuna help maintain a healthy, balanced ocean environment.

As a delicacy, the demand for wild-caught Atlantic bluefin tuna is highest in Japan, followed by the US and China. The dark red meat’s rich high-fat content gives it an intense, robust flavor that makes it perfect for sushi dishes and high-end sashimi. Marinated with seasonings that enhance its natural richness, bluefin tuna is deliciously cooked rare or seared over a grill.

Once overfished, Atlantic bluefin tuna is considered a smart seafood choice. Stocks are carefully, strictly monitored, and sustainably managed under a rebuilding plan that limits their harvest to ensure a healthy population. Along with other tuna species, this tuna is managed by the International Commission for the Conservation of Atlantic Tunas (ICCAT) and the National Marine Fisheries Service Highly Migratory Species Division.

Bluefin tuna’s high nutritional value makes it a healthy seafood choice. High in omega-3 fatty acids and low in fat and sodium, this tuna is an excellent source of lean protein and a very good source of vitamin A, vitamin B12, and selenium, as well as other nutrients like thiamin selenium, vitamin B6, niacin, and phosphorus.

Are Bluefin Tuna High in Mercury?

The short answer is “Yes.” Levels of mercury are found in all species of fish. That said, any harmful effect from the mercury in bluefin tuna depends on how much you eat and how often. Most adults can safely consume up to 400 grams a week. For large marine predators like bluefin tuna, mercury accumulation is higher and occurs, in part, from the smaller fish it consumes during its long lifespan. As a general rule, the longer marine predators live and the larger they grow, the greater potential for higher levels of mercury to accumulate in their bodies.

Just as importantly, tuna mercury levels are relative to its size and age and where the fish was caught. Bluefin tuna caught in the Gulf of Maine has the lowest levels of mercury than any other species caught anywhere. Mercury levels in bluefin tuna are affected by environmental conditions. The bioavailability of mercury in the food chain, and its rate of accumulation in species, is proportional to the levels found in regional seawater and zooplankton. Mercury can leach naturally from rocks and sediment or sources of human contamination like metal mining, smelting, and emissions from coal-powered plants. Waters of the western North Atlantic and the bluefin tuna caught there have lower mercury levels than their Mediterranean counterparts, which have the highest levels, followed by the north Pacific and Indian Oceans. The decline of mercury emissions from coal-fired power plants in the US is seen as a primary reason for a decrease of nearly 20 percent in mercury levels of tuna caught in the Gulf of Maine between 2004 and 2012.

How Long is Bluefin Tuna Season in Maine?

Fishing in Maine for this highly migratory, voracious eater varies throughout the year. It’s at its best during the summer months and lasts into September. Technically, there is no closed season. Instead, there is a high season and a low season. The warmer months are considered the high season—when baitfish concentrate in the Gulf of Maine, bluefin tuna arrive en masse along the north Atlantic coast of Maine to feed on schools of herring, mackerel and squid. The low season runs from October through May.

Where Can You Find Bluefin Tuna in Maine?

Klenda offers locally sourced, wild-caught Atlantic bluefin tuna of the highest quality. As with all our products, we source the best local catch landed by Maine fishermen we know and trust. Contact Klenda Seafood for more information on ordering our wild-caught Atlantic tuna or any of the best seafood that Maine’s coast has to offer.